82 UK companies have raised £47 million so far this year across the main equity crowdfunding platforms with a steep increase from Q3 2016 but far from the levels reached in Q3 2015, Beauhurst‘s Crowdfunding Index reveals. 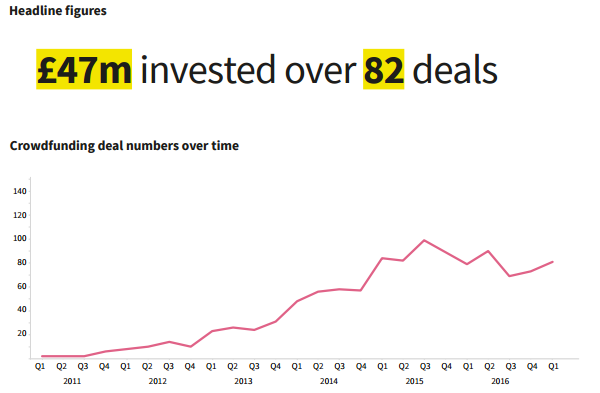 Crowdfunding has emerged as significant source of high-growth company finance in the last few years. Developments in the sector have made it a real alternative for companies at all stages of growth.

According to the main findings of the report, Crowdcube topped the ranking of the largest amount invested over the period (£23 million) while Seedrs reported the highest number of closed deals (35) and VentureFounders confirmed to be the platform with the highest average deal size (£1.5 million).

Among the biggest deals signed in the period, VentureFounders topped the Biggest crowdfunding deals in Q1 2017 list thanks to the British medical equipment manufacturer Lightpoint Medical which raised £3.3 million in March 2017 after a successful previuos round worth £1 million in December 2014 via SyndicateRoom.

Crowdcube secured the second place with the challenger bank Monzo (£2.5 million) which reached its target within four hours of opening for pre-registration, as also reported by Oliver* earlier this year. 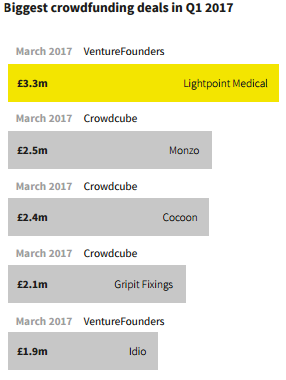 Regarding the current stage of evolution of all crowdfunded companies, Beauhurst analysis shows that 53% of companies funded are in the seed phase and 5% in the growth stage while 13 have been the exits since 2011.