While Theresa May and Jean-Claude Juncker, president of the European Commission,  are to develop an “ambitious, broad, deep and flexible partnership”, thirty business leaders from the City asked the British Prime Minister for a second referendum on Brexit. 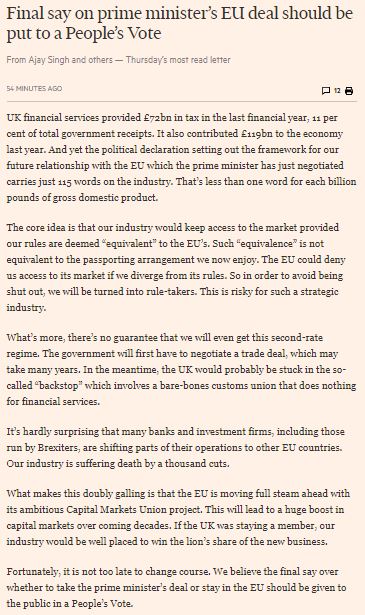 In the above-pictured letter published today (22 November 2018) on the Financial Times, they argue that,

The EU could deny us access to its market if we diverge from its rules. So in order to avoid being shut out, we will be turned into rule-takers.

there’s no guarantee that we will even get this second-rate regime.

It’s hardly surprising that many banks and investment firms, including those run by Brexiters, are shifting parts of their operations to other EU countries.

What’s most annoying though, the letter reads,

is that the EU is moving full steam ahead with its ambitious Capital Markets Union project. This will lead to a huge boost in capital markets over coming decades. If the UK was staying a member, our industry would be well placed to win the lion’s share of the new business.